The relationship of sailors and alcoholic beverages goes back centuries, long before the plantations in the Caribbean were established. Our Rum Brand Ambassador Dean tells us more about the genesis of this complex spirit.

The relationship of sailors and the odd alcoholic beverage goes back centuries, long before the plantations in the Caribbean were established. Alcohol was actually an integral part to the high calorie diet of the sailors.

British sailors famously had particularly strong ties with booze, especially rum. However, their ration was originally a more moderate daily allowance of a gallon of beer. The reason that this soon changed to spirits was because beer took up much more space and would spoil.

In the early 1700’s, at the captain’s discretion, beer was replaced with a pint of wine or ½ pint of spirits, usually brandy or rum.

Rum was kept at proof aboard the ships – this was to ensure that their gunpowder could still ignite even if rum was spilled on it. Once technology advanced, we found that proof has a quantifiable number, and that is 57.18% ABV.

At first, the rums were purchased whenever the ships docked for provisions and supplies, so the rum blend would vary vastly. This changed in 1731, when an act was passed dictating that rum rations would be given to the entire naval fleet, regardless of where they were stationed.

This created a demand for a consistent blend, and in 1784 James Man (ED&F Man) was awarded a contract to start supplying the Royal Navy with rum, something this company did all the way up until Black Tot Day in 1970. The vast majority of this rum was sourced from the British rum-producing islands (Barbados, Jamaica, Trinidad and Guyana), and shipped back to the Royal Docks in London, where the rum would then be aged and blended into a consistent product. It was then shipped out to the naval stations around the world.

There were numerous reasons for this, including; the introduction of the breathalyzer and more complex controls on ships. The day the final rum was served was dubbed Black Tot Day, and was a sad day for all involved.

The navy celebrated their fallen comrade with gun salutes and naval burials at sea, as the last tots were enjoyed across the British fleets.

Any rum that remained after Black Tot Day was transferred into wicker-covered demijohns at full strength. It was stored at the spirits ageing warehouses along the Thames, only being brought out for Royal Weddings, before finally being put up for auction.

It was these very same demijohns that caught the attention of Sukhinder Singh of Elixir Distillers and The Whisky Exchange back in 2008. Lured in by the rich complexities, Elixir Distillers spent the next few years sourcing the rest of these rare demijohns. Once obtained they were blended and bottled as ‘Black Tot - The Last Consignment’ in 2011. A piece of liquid history, and one for any serious collector’s cabinet.

‘Navy Style’ rums, generally thought of as a heavier-style Caribbean blends, are still enjoyed across the UK, in local pubs and 5* Hotels alike. 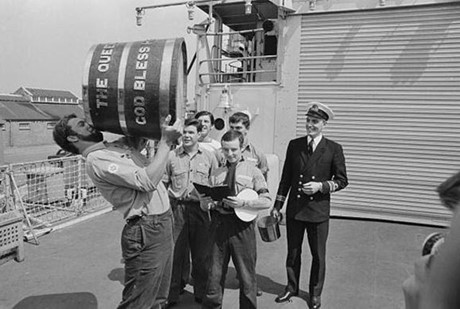 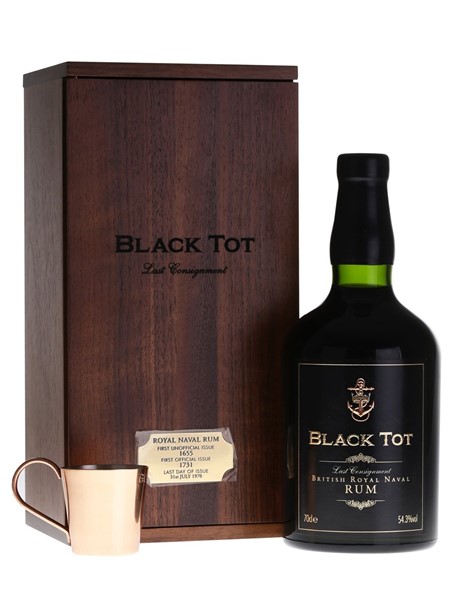