We're delighted to announce that for the second consecutive time, one of our very own UK Bartender's has been crowned Clairin: Spirit of Haiti World Champion!

At the end of May 2018, after winning the UK Final at The Domino in Leeds, Adrien Russotto of the Henson Bar in Soho jetted off to fabulous Haiti to represent the UK at the grand final of Clairin: Spirit of Haiti World Championships. Adrien did us all extremely proud coming out on top as the joint winner. We caught up with him just after he'd landed back and was in between some shifts at the Henson Bar.

SBL - So Adrien, CONGRATULATIONS! How did it feel to the UK Winner and then the World Champion!

AR - It feels amazing! I don't enter many competitions, but, for this one especially -I was very proud. I love the product and the people who create such an interesting liquid. I was excited to get out to Haiti to see it in the flesh. Representing the U.K in a World final means a lot to me.

SBL - What is it that you were most looking forward to seeing in Haiti?

AR - All my friends were all saying before I left, "it will be an adventure!". I went backpacking for a while in South America a while back and I am in love with the Caribbean islands, but Haiti is different. From the historical past, earthquakes, and hurricanes, I was really interested to meet those people, their culture and obviously to try Clairin straight from the still! The fresh Christalline sugar cane juice was so interesting to taste.

SBL - What's the most amazing thing you took away from your time in Haiti?

AR - Eleven flat tyres! It was a real adventure, just the whole journey and discovering it with everyone. If I had to choose, I will say the people, the real smile and laughs they were gsharing with us everyday. Also the way the producers adapt to nature and keep the traditions to produce Clairin. That was fascinating.

SBL - Ah, so that was quite interesting meeting the producers?

It was fantastic, to see how they know and are able to adapt to natural changes to produce Clairin. They're incredibly proud of the liquid they produce and so passionate about it - rightly so - it's a fantastic product that's so versatile and will hopefully continue to grow within the UK.

SBL - Were you impressed by the level brought by the other competitors?

AR - Of course, the level was very high. All competitors had a different style and I'm glad I had the opportunity to meet all of them and learn from them. We're all part of a family now. I'm also very happy to share the title with the "Grande Michele"!

SBL - Now for the bit we've all been waiting for - What was the Grand Final winning serve?

AR - Throughout our trip we saw so many things, from beautiful varying landscapes, islands, cities, but the only thing we saw everywhere in Haiti was the "Marchande". Those women walking all day with big bucket on their heads, carrying spices, chicken, rice or Clairin!

So I decided to make a "spices" powder with lots of different spices I found in Jacmel market. (were I got lost alone and had an amazing time with the locals - a story for another time...) the spices mix included, Pete Panno, Haitien saffron, star anis, black peppercorn, cinnamon, nutmeg and bitter cacao. I used these to create the...

Dry shake and shake, double strain in a "Calbas bowl" hold by a rolled tissue in the same way the ladies of Haiti put on their head to hold the bucket.

For the garnish, I created a stencil with an Arawak face (like the Vaval symbol) and stencilled with the spices on the top of the cocktail, finished with a Pete Panno leave.

SBL - Adrien, we can see why you won, that sounds delicious! What are we going to catch you doing next then

AR - Well, I would love to explore more Countries, cultures and traditions around the world, keep mixing flavours and sharing experience like this.

I will still be behind the bar at Henson's most of the time -  I love it! -  but I have some nice projects coming up soon so keep any eye out!

I have to give a massive thanks to Luca Gargano, Daniele Biondi, Matt Harrison and all the people behind this adventure of a life time.

SBL - Thank you Adrien, we'll see you at the bar!

You can find more about Clairin HERE

You can follow Adrien's exploits on his Instagram @adrienrussotto or pop down to see him at Henson's sometime. 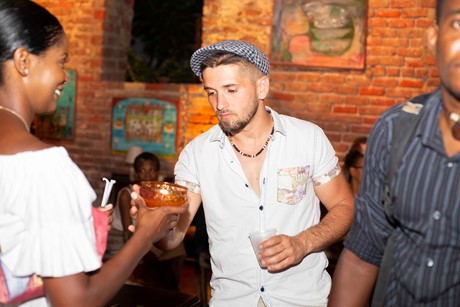