To celebrate the launch of #OurWhisky and International Women's Day, we sat down with our very own whisk(e)y wonder, Stef Holt, to have a little chat about all things whisky...

To celebrate International Women’s Day we caught up with our very own whisk(e)y wonder, Stef Holt, who has recently been a part of the newly launched #OurWhisky campaign by Becky Paskin of ScotchWhisky.com and Georgie Bell, Bacardi’s Global Malts Ambassador. #OurWhisky is an on-going global campaign to highlight the diversity of the whisky industry, the inclusiveness of whisky and the variety of its drinkers. The project is designed to challenge opinions of what a whisky drinker looks like through a photographical social media series.

Let's get down to our chat with Stef...

Thank you so much for joining us Stef! We hear you've been travelling around Islay recently, always a great spot for any whisky fan. We're going to jump straight into it, What is it that you like about Whisky?

SH: I love all the options! There’s something there for no matter what you are feeling or doing, and I especially like helping people who are new to whisky find the style that suits them and surprising them.

Ah we know that to be true, it's the beauty of whisky that there will always be a dram right for you. Speaking of that, which dram first made you sit back and say "wow!"?

SH: I'd just moved to London from Edinburgh and went to see a mate (Chris Moore, now of Coupette) who worked at a Scottish-themed bar/restaurant. They gave me a dram of Ardbeg Uigeadail and it blew my mind! It tasted of barbecues and was so smoky and delicious but without any of the TCP notes that had put me off earlier tastings of peated whiskies. From that point on i actually found that i liked drinking neat whisky which I'd never done before – it amuses me that it happened when I’d left Scotland! I mostly drank bourbon cocktails up there.

You could say it started you on the path that led you to being with us, that suits us just fine. If there was one key bit of advice you could give to someone starting their whisk(e)y journey, what would it be?

SH: Try and think about things that you like eating/drinking and why you like their flavours. I find it really useful when trying to recommend a whisky to ask what someone usually likes drinking as you can work out what kind of style might suit their palate. I remember being given lots of light, elegant whiskies when I was starting and not being excited about any of them, but it took a big, rich smoky flavour to really click with me as those are the kinds of flavours i liked at the time. And everyone should remember that their palate changes over time, so keep trying different things – I’m now starting to appreciate the more elegant nuanced whiskies, but it took a while.

That's some great advice right there, as with most things in life, it's a marathon not a sprint. Let it come to you in time and more often than not you'll be all the more grateful. Now who would you consider to be your biggest inspiration to you in whisky?

SH: She wasn't in the industry, but I'm going to say my Gran. She had a whisky with a splash of soda (two cubes of ice!) every evening at 5pm, and then another one while cooking dinner. I think because of her I never thought of whisky as a "Man's drink", it was always a thing that signalled the end of work or the start of the evening, or just the best part of the day. I remember visiting once she'd retired and she was joking that she didn't have to wait for 5pm anymore - she only sneaked it forward by about 10/15 minutes over many years of retirement, but I remember her looking slightly mischievous about it, as if she was breaking the rules!

She sounds like our kind of Lady! Thank you so much for stopping by Stef and giving us a little insight, there is one final question though... What is your Desert Island Dram...?

SH: Now that would be telling.

Fair enough! Thank you again and we'll see you at a Whisky Show soon. 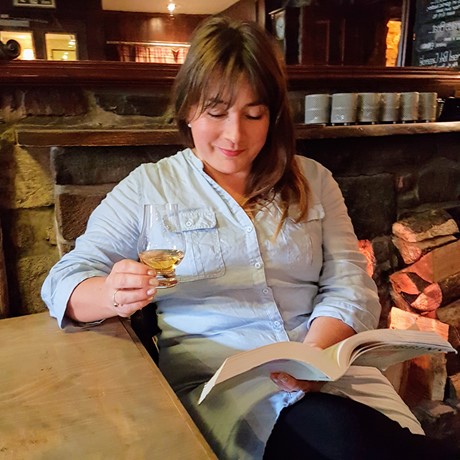 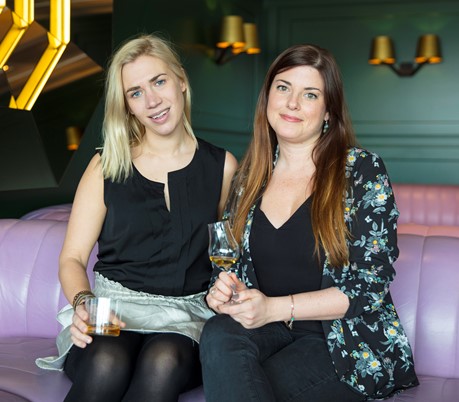 Georgie & Becky the masterminds behind #OurWhisky